MULTI, SYN and CELR saw a substantial boost in price as the crypto ecosystem focused on integrating cross-chain interoperability as a new fundamental component in DeFi.

Interoperability is shaping up to be one of the main themes for the cryptocurrency market in 2022 as projects across the ecosystem unveil integrations that make their networks Ethereum (ETH) Virtual Machine (EVM) compatible.

Here are three of the top volume cross-chain bridges that the cryptocurrency community uses to transfer assets between blockchain networks.

Multichain (MULTI), formerly known as Anyswap, is a cross-chain router protocol that aims to become the go-to router for the emerging Web3 ecosystem.

According to data from Defi Llama, Multichain is the top-ranked cross-chain swap protocol by total value locked, with $8.95 billion currently locked on the platform.

One of the main reasons for the high TVL on Multichain is the large number of blockchain networks supported by the protocol. Currently, 30 different chainscan be accessed on the network.

According to data provided by Multichain, the protocol has processed a total of $53.15 billion worth of volume since launching, with $19.08 billion of that being transacted in the past 30 days alone. There are currently 485,399 users that have interacted with the Multichain protocol, amounting to nearly 2.256 million transactions. 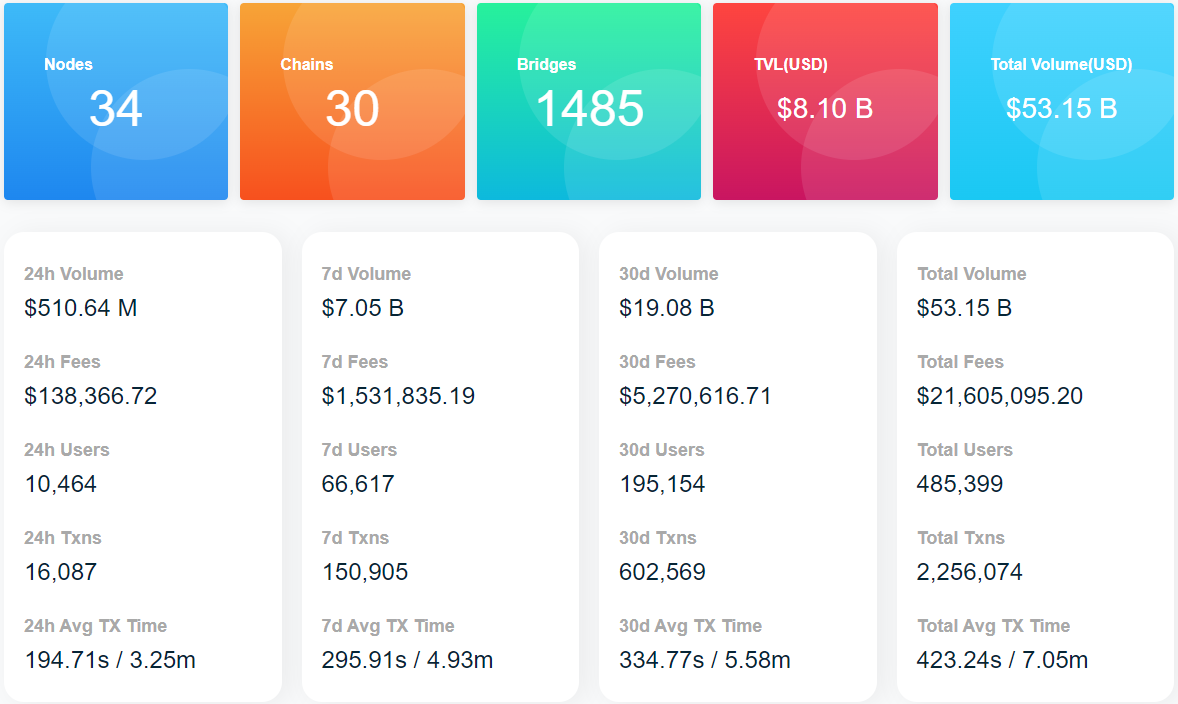 Users who deposit tokens into one of the pools supported by Multichain receive a sare of the transaction fees generated by the pool in question.

The protocol’s native MULTI token is used to vote and participate in the governance of the Multichain ecosystem and has a circulating supply of 18.64 million tokens out of a total 100 million.

Synapse (SYN) refers to itself as a “cross-chain layer ∞ protocol” that is designed to offer users interoperability between separate blockchain networks.

According to data from Defi Llama, Synapse recently hit an all-time high in total value locked of $1.16 billion prior to experiencing a wave of outflows that lowered the TVL to 740.43 million.

The Synapse protocol currently supports 12 different chains which have a combined total bridged volume of $5.33 billion according to data from the platform’s dashboard.

A large percentage of the total volume recorded on Synapse has come since the start of 2022 with the protocol seeing an all-time high bridge volume of $157.8 million on Jan. 23.

The protocol’s native SYN token has several uses within the ecosystem. Token holders can use it to conduct community governance votes via the SynapseDAO, liquidity providers (LPs) receive a percentage yield paid out in SYN for their deposits and it is also used as a subsidy to pay for the gas expended by network validators to secure transactions across the network.

LPs also receive a share of the protocol fees earned by the Synapse platform on each transaction.

Another popular cross-chain bridge is the Celer cBridge, a multi-chain network that enables instant, low-cost value transfers between 19 different networks.

The cBridge is a subsector of the larger Celer (CELR) ecosystem and utilizes the CELR token for operations on the protocol and as the reward token for liquidity providers.

Along with the CELR rewards paid to LPs, a percentage of the transaction fees generated by people who use the liquidity pools to bridge funds across chains are paid out to LPs and added directly to the pools, allowing the rewards to compound.

A total of 89,897 unique addresses have interacted with the protocol since inception and have conducted a total of $2.842 billion in transaction volume.

Similar to the transfer trend seen with Synapse, the transaction volume on cBridge has gotten noticeably higher in 2022 with a record $71.12 million being transacted on Jan. 22.