All you need to know about the Asus ROG Phone 5S

The ROG series from Asus is an established brand in the world of high-performance gaming peripherals. So, it’s no surprise that a ROG branded phone will carry that same spirit.

Built from the ground up to be as uncompromising as possible, the ROG Phone 5S delivers the ultimate experience for mobile gamers. But in a market where mobile games are optimised to perform on as many smartphones as possible, do we really need a specialised gaming phone? 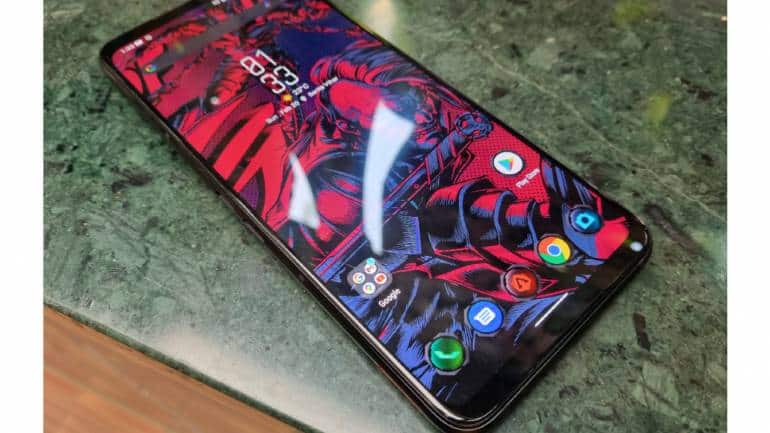 The ROG design ethos is in full force here, with stylised accents for the SIM tray and power button, to an RGB logo on the back that can be fully customised with colour options and a variety of different effects. It can also be set to trigger during certain phone functions like an incoming notification or during playtime.

The aluminium and glass construction makes it feel premium in the hands but also heavy. This is a beefy phone, something you will realise when you first pick it up. The rear glass finish is also slippery, and I think Asus knows this, which is why they included the plastic back cover, and it really is a necessity with this phone.

At the bottom is a USB Type-C port flanked by a 3.5mm headphone port, and in a nice touch on the left is another USB Type-C port which you can use to charge the phone while using it in landscape mode. This ensures the charging wire does not get in the way during long gaming sessions.

On the right, is a nice and clicky power button along with a nice and equally clicky volume rocker. The phone also feels tall to use in one-hand comfortably and feels like it was designed to be held in landscape mode, which is fine since most of your time is going to be spent gaming on this phone anyway.

I normally don’t talk about speakers in a phone review but the set of stereo speakers here are awesome. The front-facing stereo setup (one on top, one at the bottom) is possibly the best sounding speakers on a phone that I have heard. They get loud enough to fill a small room but don’t skimp on the details either. The speakers sound rich with clear mids and bass, but also great separation.

They aren’t perfect and do tend to crackle at louder volumes, but they are honestly leagues ahead of most speaker setups on smartphones these days.

As if that weren’t enough, there is the headphone jack, an increasing rarity in phones. More importantly, it also supports Qualcomm’s high-resolution Bluetooth codecs like aptX HD.

Like the ROG Phone 5 before, the 5S has Air Triggers, which are touch-sensitive zones along the sides of the phone, which can be squeezed, tapped, or swiped on to perform various custom functions. They can be used to set up macros or to assign extra inputs that you might have trouble with within some games.

They can also be used to assign shortcuts to launch apps, such as a short squeeze to launch Google Assistant or a long one to enable X mode (more on that later).

If there is a nit-pick, it’s that the 5S is unapologetically loud and in your face by design. The stylised patterns on the body, hexagonal cut-outs in the plastic cover, the subtle red accents and the large ROG logo make it obvious at who the phone is marketed for.

It screams “I am a gamer” and while that obviously isn’t a problem for the target audience, it won’t appeal much to people that prefer subtler designs. 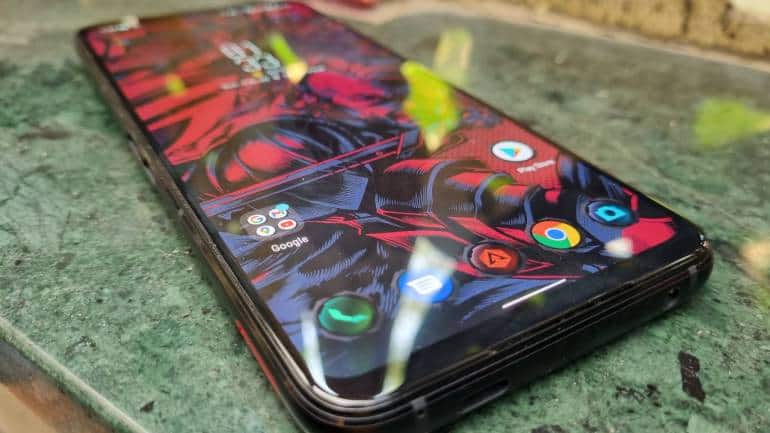 The 6.78-inch AMOLED screen is excellent. With an FHD+ resolution and a refresh rate up to 144Hz, it is simply a joy to consume content on this display. It also has a touch sampling rate 360Hz and is protected by Corning Gorilla Glass Victus.

The peak brightness of 1200 nits makes it legible in almost any environment. It has great sharpness, doesn’t scrunch detail, has a wide colour gamut and is a nice vibrant screen that pops. Seriously, no complaints here, easily one of the smoothest and best-performing screens on the market. In place of Zen UI, Asus’ normal phone launcher, the 5S opts for the ROG UI launcher, which the company says is optimised for better performance. It also carries that gaming-focused aesthetic forward, with little touches like the icons in the quick settings turning red when toggling X mode or helpful touchpoints that tell you where the Air Triggers are.

This carries over in the selection of wallpapers, icons and themes bundled with the phone, and more that you can download. There isn’t much bloat here either, it does come with a few apps pre-installed, that can be removed and some system apps that can’t but overall, Asus keeps it light, which is great for performance.

Next up is the Armoury Crate that serves as the hub for all your gaming needs. It shows you all the installed games on your phone at a quick glance and lets you edit profiles for each individual one, such as turning off calls during game, boosting performance, setting a particular refresh rate for a game, macros, and a lot more.

Armoury Crate also lets you adjust phone profiles on the fly, letting you choose between performance or battery life or a balance between both.

While in-game, swiping from the top-left brings up the game genie dashboard which is a quick-settings panel that lets you adjusts things like quick control for macros or assigning shortcuts, or dynamically speeding up performance. It also gives you a real-time readout of things like temperature and CPU clock speed.

Now there is a drawback to the UI, it’s still based on Android 11 with the security updates dating back to September 2021 on our unit. Now Asus has said that the both the ROG Phone 5 and 5s will get the Android 12 update in Q1 2022, but a firm date has not been announced yet. 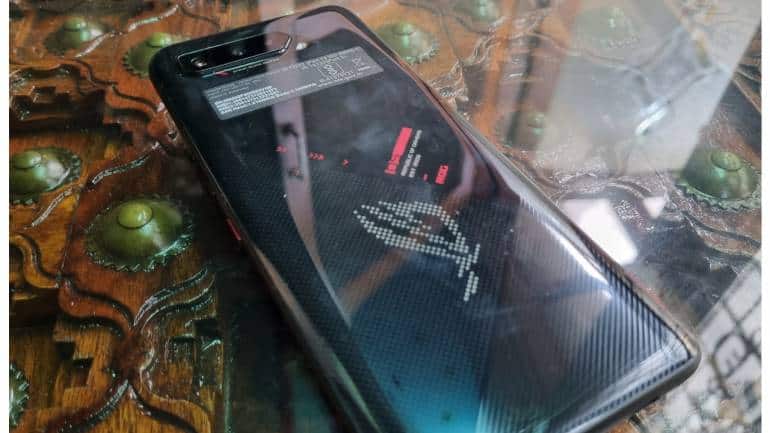 Things rarely slow this phone down, though I did notice weird quirks like the Share menu taking an abnormally long time to show up on occasion or the odd stutters when opening the camera app. These weren’t too frequent and overall, don’t detract from the otherwise smooth performance in everything.

If you still want more, Asus also allows you to overclock performance with X Mode, making the phone perform even faster. The drawback to all this power is heat and it is quite noticeable during longer gaming sessions when the back of the phone does get warm to the touch. The triple camera setup on the back features a 64-megapixel primary shooter coupled with a 13-megapixel ultrawide sensor and a 5-megapixel macro camera. It’s a decent setup, capable of some great photos in daylight with natural colours and detail but falls behind when compared to the competition.

When put up against other gaming focused phones however, the ROG Phone 5S certainly holds its own.

In low-light, things are noticeably a little worse, with photos coming out a lot noisier. The ultra-wide and macro sensors are the weaker links in the module, producing washed-out photos that lack in detail and vibrancy. The use of the ultra-wide is relegated mostly to expansive landscape shots where you won’t notice the mushy image too much.

The depth-of-field effect in portrait mode isn’t handled well either and tends to be aggressive while blurring the background, making your primary subject look like an artificial cut-out. It can produce some nice images when used responsibly but don’t rely on it too much.

On the front is a 24-megapixel camera which is decent for selfies in well-lit environments, but the quality takes a nosedive in low-light situations. With a 6000mAh battery that is split into two 3000mAh cells, the 5S should be a battery powerhouse. The catch here is that if you are doing the one thing you are supposed to be doing on this phone (i.e., Gaming), you will notice that the gains are minimal.

Under heavy use, you will constantly reach for the charger but thankfully, Asus does bundle a 30W charger in the box that is capable of fast charging. While that is a step down from the 65W charger included with ROG Phone 5, it will still get you up and running in a pinch.

Asus includes a neat little feature that lets you bypass charging the battery altogether and route the power to the system instead, while connected to a charger, to squeeze out even more performance.

Should you buy it?

If you own the Asus ROG Phone 5, then this is an incremental update and the 5 should serve you well for the time being. For a first-time user who is a gaming enthusiast, why not? It does what it set out to do very well.

For everyone else, with a price of Rs. 49,999 for the base 8GB + 128GB variant, it gets a little trickier. Do you want great cameras? Then this phone isn’t for you. Want a decent gaming phone but don’t care about the extras? The ROG Phone 5S is not what you want.

The ROG Phone 5S is built to appeal to a niche audience, one that wants absolutely no compromises in their mobile gaming experience. These maybe the pro esports players that will gain a noticeable advantage or high-performance hardware enthusiasts.

For the casual crowd, the Asus ROG Phone 5S is a tough sell but maybe that’s the whole idea in the first place.