Rippon also compared Valieva’s situation to that of Team USA’s Sha’Carri Richardson, who was banned from the 2020 Tokyo Summer Olympics after a positive marijuana test — calling it a “double standard.”

Valieva, 15, is at the center of a drugs controversy after providing a positive test for a banned heart medication in December. Yesterday, the Court of Arbitration for Sport gave her the green light to compete anyway.

Rippon said the Russian Olympic Committee (ROC), which Valieva competes for, should be kicked out of the Olympics.

“The message is not getting through. And the punishment of just not being able to compete under their flag and then getting to change their anthem as like the only sort of consequence they need to face,” Rippon said. “Honestly, it is laughable from the point of the athlete.”

Rippon said the Russians have “repeatedly shown that they don’t want to play by the rules.”

Comparing it to his own experience, Rippon — who won bronze in the team event at Pyeongchang 2018 — said he was scared to even take a multivitamin when he was competing.

“Double standard”: On Monday, Richardson questioned on Twitter why Valieva was allowed to continue competing, months after a positive test for cannabis derailed her own Olympic dreams.

Rippon said there was a “double standard” in how the two cases were handled.

“[Richardson’s] a young black woman. We all wanted to cheer for her. Her personality is amazing. She’s an incredible athlete. She tested positive for marijuana. Immediately you saw … the US anti-doping agencies said you can’t compete. She was on TV the next day, apologizing, taking accountability,” Rippon said.

In Valieva’s case, the Russian doping agency first suspended her and then lifted the provisional ban after an appeal from the teenage skater.

“So it’s two different agencies with two different protocols and two different integrity standards… The Court of Arbitration here in Beijing made — I think it is a joke. How does somebody with a positive test still get to compete in the Olympic Games.? The whole point is that it is a level playing field and everyone is competing clean,” Rippon said.

South Korea may have clinched its first gold medal at Beijing 2022 last week, but the success came amid tensions with China over alleged cultural appropriation and “biased judgments” during the Winter Olympics.

In recent years, relations between the two countries have been tense both politically and culturally and this year’s Games have caused further flashpoints.

During the opening ceremony, a woman on stage appeared to be wearing a traditional Korean hanbok dress, which South Koreans have long been irked about, deeming China to be passing off South Korean culture as its own.

“I’m mad that they’ve introduced a person wearing hanbok on an international Olympic stage as a Chinese person! I’m mad that they are introducing Korean culture as Chinese to the world,” one wrote on Twitter.

The Chinese Embassy in Seoul said on Wednesday that China is composed of 56 ethnic groups, and it is “not only their wish but also their right” to wear ethnic clothes during the Games.

“The Korean ethnic group in China and the North and South of the Korean Peninsula are of the same origin and share a common traditional culture, including clothing,” the embassy said.
“The so-called ‘cultural project’ and ‘cultural appropriation’ are completely untenable.”

It’s a bitingly cold day at the Genting Snow Park in Zhangjiakou, where the women’s freeski slopestyle finals are getting underway.

As the high-speed train pulls into the Taizicheng station at 7.10 a.m. local time, an attendant reminds passengers to keep warm.

Stepping outside the station, it is snowing lightly outside. The brown mountains are coated with a dusting of white, with the ground covered by a thick blanket of snow.

Participants are greeted by snow pandas, bunnies and snowmen built by volunteers and staff around various venues.

At the Genting Snow Park on top of the mountain, the sun has broken through the gray clouds and the wind hasn’t picked up yet.

But it is bitterly cold.

Spectators don’t seem to be put off by the frigid temperatures — they are huddled up, many wrapped in furry hats and waiting in excitement, waving pink flags featuring the beloved Olympic mascot, Bing Dwen Dwen.

The crowd here are waiting for one athlete: China’s new Olympic superstar Eileen Gu, who will strive for her second gold medal.

All eyes will be on Russian figure skater Kamila Valieva on Tuesday as she takes to the ice after being cleared to compete despite a failed drugs test.

Here’s what to watch today:

A drugs test controversy that has overshadowed Beijing 2022 is set to rumble on after the Winter Olympics finishes.

For now, teenage figure skater Kamila Valieva has won a temporary reprieve — the 15-year-old gets to compete in the women’s single skating competition on Tuesday.

But, if she wins this week, there will be no gold medal ceremony or bouquet of flowers to hold and when she heads back to Russia, Valieva will enter a bureaucratic limbo as different sporting and doping organizations contest the implications of the skater’s positive test for the banned heart drug trimetazidine, which is commonly used to treat people with angina.

On Monday, the Court of Arbitration for Sport (CAS) ruled that Valieva can compete for the remainder of this year’s Winter Games, despite testing positive for a prohibited substance ahead of Beijing 2022.

The Valieva controversy has reignited doubts about the Olympic movement’s handling of Russian athletes competing at successive Games, but also the oversight of the World Anti-Doping Agency (WADA) and its working relationship with the Russian Anti-Doping Agency (RUSADA).

The head of the US Anti-Doping Agency (USADA) Travis Tygart says Russia has “hijacked the competition” and “stolen the moment from clean athletes” for the “sixth consecutive Olympic Games” after CAS rejected appeals to reinstate a provisional ban on Valieva.

The International Olympic Committee (IOC), International Skating Union (ISU) and WADA had all called on CAS to reinstate a suspension Valieva was given by RUSADA over a doping violation concerning a test sample taken in December.

In a statement, CAS said it had decided Valieva should be allowed to compete due to “exceptional circumstances,” including specific provisions linked to her status as a “protected person” under the WADA code, because she is a minor.

The CAS also noted Valieva did not test positive during the Winter Olympics. In making the decision the panel considered “fundamental principles of fairness, proportionality, irreparable harm,” a statement said. 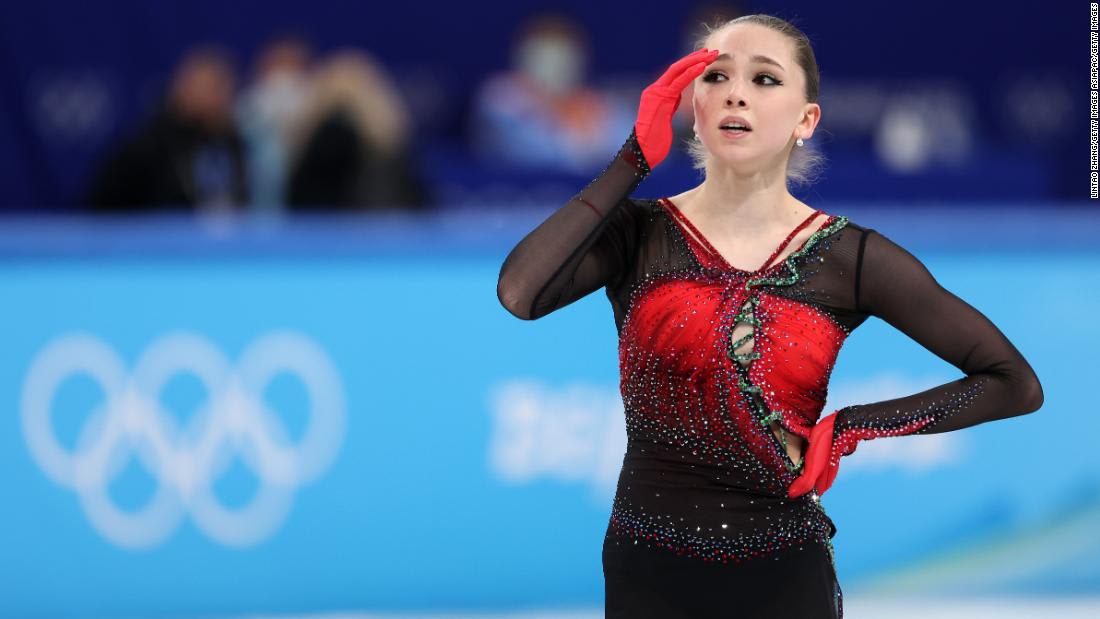 Day 10 of the Winter Olympics served up drama, excitement and a mixed set of podium finishes.

? Golds across the board: Team USA’s Kallie Humphries won the inaugral monobob event, France’s Gabriella Papadakis and Guillaume Cizeron clinched the gold in world record fashion in the ice dance event, and China’s Xu Mengtao took the top spot in the women’s aerials. Meanwhile, Austria captured the gold in the men’s team event.

⛸ Russian teen skater cleared to compete: Teen figure skater Kamila Valieva was cleared to continue participating in the Olympics despite testing positive for a banned substance in December. The Court of Arbitration for Sports (CAS) announced the decision early Monday morning, meaning the 15-year-old will compete in today’s single skating short program.

Heading into Day 11 of the Beijing Winter Olympics, here’s where the teams rank in the medal standings:

Canada-born Kaillie Humphries​, winner of the first-ever Olympic gold in the monobob, says she “never gave up” on herself.

It’s the third Olympic gold medal for the 36-year-old but the first while representing the US — Humphries switched allegiances after ​filing a harassment complaint ​with Bobsleigh Canada Skeleton (BCS) in ​2018.

“A lot of things were going through my mind. It has been a journey to get here and it hasn’t always been guaranteed,” Humphries said after her victory.

“It hasn’t always been easy. I have had a lot of fears and doubts. I have had highs and lows.”

Humphries won her first gold medal in the two-woman bobsled event back in Vancouver 2010, before defending her title in Sochi 2014.

However, following a bronze medal finish in Pyeongchang in 2018, Humphries says she fell into a depression and alleged she was verbally and mentally harassed by ​her coach.

She subsequently filed a complaint with BCS and the governing body said it immediately forwarded the case to an independent investigator.

“Bobsleigh Canada Skeleton took Kaillie’s allegations extremely seriously,” BCS said in a statement in 2019.
“Investigating these allegations to their fullest was our number-one priority to ensure a safe training and competitive environment for everyone involved in our sport. The investigation found insufficient evidence of Kaillie’s allegations.” 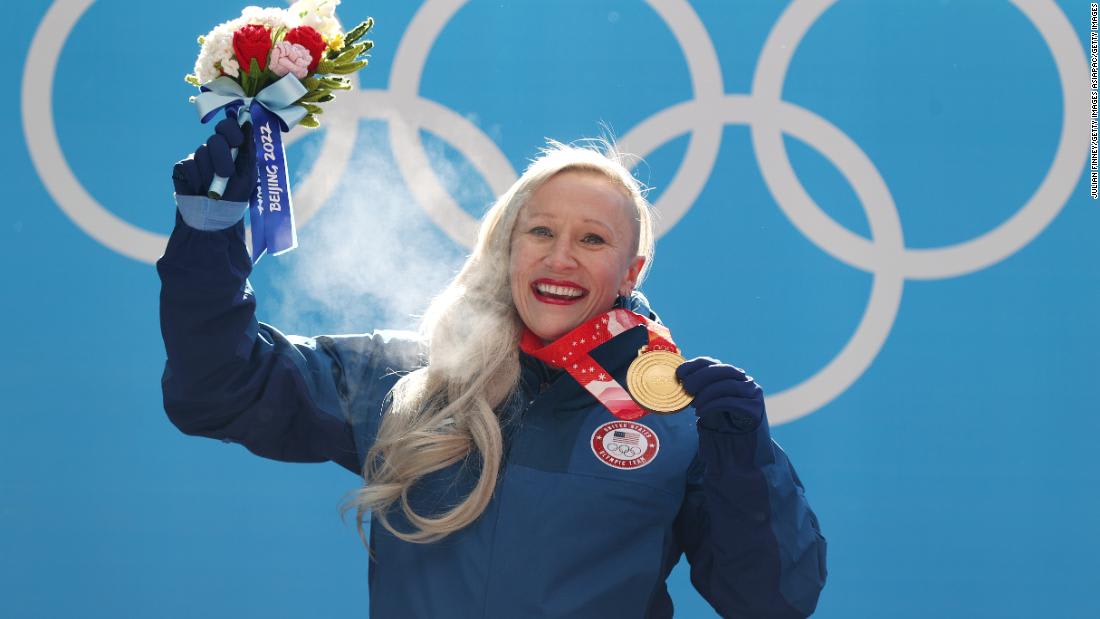 Monday saw a mixed set of podium finishes at the 2022 Beijing Winter Olympics. Take a look at the winners: