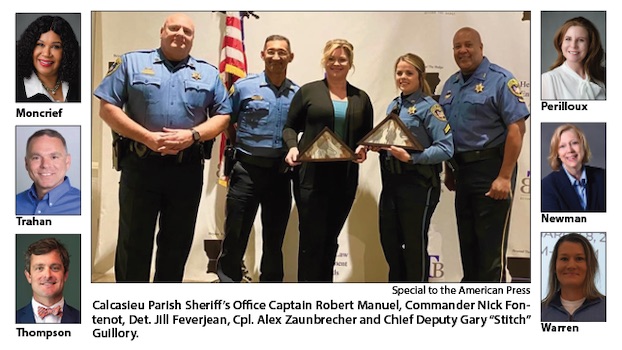 Peter O’Carroll, founder of the O’Carroll Group: Advertising, Marketing, Public Relations and Digital Media, has transferred ownership of the agency to Brett Downer, who has been with the firm since 2018.

Downer has partnered with Oliver “Rick” Richard, Lake Charles investor and philanthropist, for a new ownership team, with Downer as majority owner and managing partner.

Downer, a former American Press editor and Houston radio anchor, has more than 35 years of public relations, media, advertising and digital media experience. He is a graduate of, and past instructor for, McNeese State University. He serves on the board of directors of the Better Business Bureau Foundation and the Lake Charles Little Theatre.

Richard is CEO of Empire of the Seed. He has undertaken a number of local civic, revitalization and preservation projects, often in tandem with his wife, Donna Richard.

Peter O’Carroll, who founded the agency in 1978, will remain a full-time member of the agency’s creative team.

The Foundation promotes and facilitates giving in Southwest Louisiana and beyond, by empowering individuals, companies, nonprofits, and communities to respond to needs and opportunities that matter. The Community Foundation connects people who care with causes that matter.

In honor of National Women’s Month, Sowela Technical Community College launched its first-ever “Phenomenal Women of Sowela” Awards to honor one student, one staff member and one faculty member.

The inaugural winners were Samantha Warren for the student award, Jeanine Newman for the staff award and Heather Perilloux for the faculty award.

Warren is serving in the military and will graduate with three degrees from Sowela in May. Newman is the current vice chancellor of finance at Sowela. Perilloux is a surgical technology instructor at Sowela.

All nominations for the new awards are based on feedback and submissions from Sowela students, faculty and staff. The awards honor women who make a positive impact inside and outside of the Sowela classroom.

The college plans to continue the newly instituted awards annually every March to coincide with Women’s History Month.

Calcasieu Parish Sheriff’s Office Detective Jill Feverjean and Cpl. Alex Zaunbrecher were two of 15 law enforcement officers from across the state to be awarded the 2022 Heart of Law Enforcement Award.

Feverjean and Zaunbrecher were nominated to receive this award for their selfless acts of kindness performed during 2021.

On May 17, 2021, several communities in Calcasieu Parish were caught off guard as a historic 16-18 inches of rain fell over a six-hour period, causing an unprecedented flash flood. During this time, deputies from the Calcasieu Parish Sheriff’s Office were deployed to do what they do best, respond to emergencies. One place where deputies were sent was a local church which had quickly mobilized to serve as a makeshift shelter.

In addition to providing crowd control functions, deputies were taking in reports of stranded motorists and residents from those who were able to get to the shelter. While speaking with residents and observing the surroundings, Feverjean noticed a despondent woman with no shoes. What really caught Feverjean’s attention, however, was the infant on an oxygen tank who was clinging to the shoeless woman.

Feverjean immediately approached the woman and child to inquire whether medical attention was needed. The woman responded that the child was good for the time being. Then, the woman relayed her story that she had quickly fled the rising flood waters with only minimal supplies for herself and her child. Feverjean into action. Feverjean went to the store and used her personal funds to buy shoes, diapers, and formula for the woman and child.

On Jan. 20, Zaunbrecher was dispatched to a disturbance call. During the course of the investigation, it was revealed that one of the individuals present on scene was a victim of human trafficking. The adult victim had a small child with her. Both of them were apprehensive of law enforcement and the adult victim was less than cooperative with responding deputies trying to file their report. Zaunbrecher intervened and was able to calm down the victim and also encouraged her to participate in the investigation. Subsequently, Zaunbrecher learned the adult victim was heavily reliant on the male suspect from the disturbance call, mainly because she and her child were homeless. Zaunbrecher took it upon herself to secure a motel room for the mom and child, and also purchased food and clothing using her personal funds. Zaunbrecher also ensured the child had a few toys to occupy her time while at the hotel. The next morning, while Zaunbrecher was off-duty, she was able to locate a family friendly homeless shelter for the adult victim and child. With no other means of transportation, Zaunbrecher, while off-duty, drove them across the state to the shelter and helped to get them settled in.

The deputies were presented the award by Beyond the Badge, a non-profit organization, in Baton Rouge.