Penn National Gaming‘s (NASDAQ:PENN) mobile gaming efforts have been getting the attention of investors because of their potential for faster growth and more significant profit potential. The segment thrived at the pandemic onset as land-based casinos were forced to close to reduce the spread of COVID-19. As economies reopen, investors are worried mobile gaming growth could slow for Penn National.

The company, which also operates regional land-based casinos across the U.S., is scheduled to report fiscal 2021 fourth-quarter earnings on Thursday, Feb. 3. Investors and analysts will be keen to see what updates the company provides on its efforts to expand its mobile gaming reach. Let’s take a look at what else might be discussed in the upcoming report. 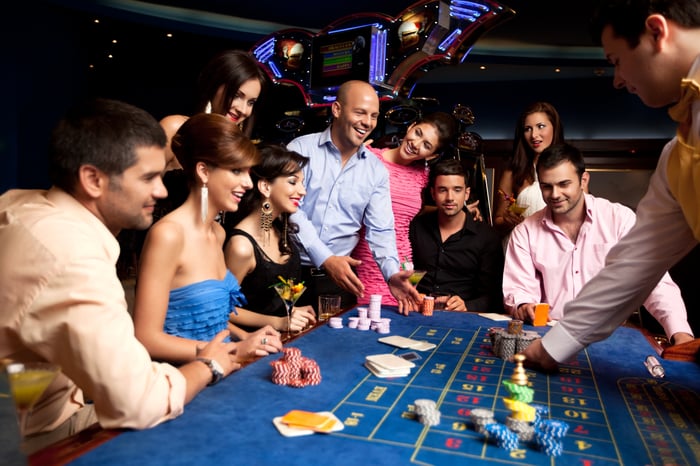 Interestingly, the slowing growth scenario has yet to play out. In its most recent quarter ended Sept. 30, Penn National reported revenue more than tripling in the segment that includes mobile gaming. Specifically, Penn generated $96.5 million in revenue from the segment compared with $23.7 million in the same quarter the prior year. Part of the reason for the growth is the staggered way the company has expanded its operations. The company and other mobile gaming operators must get approval to operate on a state-by-state basis. Furthermore, there is a lag between when it gets approval and goes live in a jurisdiction.

As a result, shareholders got good news in this regard in the most recent quarter as Penn National’s mobile gaming platform went live in five new states. Jay Snowden, President and Chief Executive Officer, commented: “We achieved many significant milestones in the third quarter. We successfully launched the Barstool Sportsbook mobile app in five states (Colorado, New Jersey, Tennessee, Virginia, and Arizona), which more than doubled our footprint.”

Undoubtedly, that helped fuel mobile gaming revenue growth in the quarter. But investors will want to see the momentum continue in Q4. Otherwise, it might appear that customers gave the service a try amid enthusiasm from the launch and then did not return after the initial engagement.

In the November earnings report release statement, management signaled a different tactic from that of competitor DraftKings with regards to customer acquisition:

Overall, we are benefiting from our increased scale and are driving higher handle and revenue market share across the board while remaining disciplined with our marketing and promotional spend. These results underscore our commitment to our business model, which remains focused on near-term profitability rather than aggressive marketing aimed at generating short-term increases in handle. DraftKings is spending aggressively on marketing and promotion to acquire customers, leading to massive losses on the bottom line.

What this could mean for Penn National Gaming investors

Analysts on Wall Street expect Penn National Gaming to report revenue of $1.5 billion and earnings per share (EPS) of $0.54. If it meets those projections, it would be increases of 46.20% and 671%, respectively, from the same period the year before.

Still, despite the improving performance, Penn National’s stock is getting pounded. It’s down 43% just in the last three months. Perhaps more important than this quarter’s sales and profits will be management’s discussion and reporting on its mobile gaming segment. If it can show continued momentum in new states, it might help alleviate stock price decreases for the time being.

This article represents the opinion of the writer, who may disagree with the “official” recommendation position of a Motley Fool premium advisory service. We’re motley! Questioning an investing thesis — even one of our own — helps us all think critically about investing and make decisions that help us become smarter, happier, and richer.