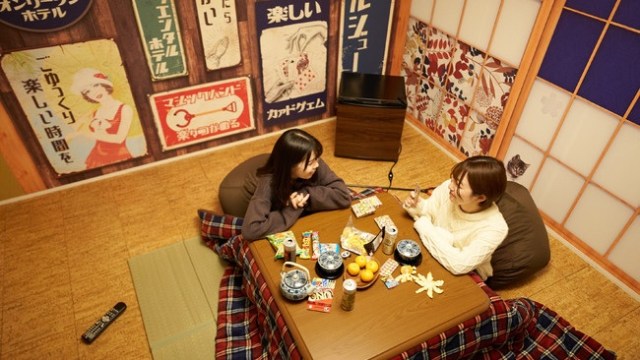 A lot of hotels in Japan offer both western and Japanese-style rooms. The former tend to have the plusher furnishings, like sofas and beds with soft mattress, while the appeal of the latter is their classical aesthetics and cultural connection to the traditional Japanese lifestyle.

But though there’s an understated elegance to Japanese-style hotel rooms, they can sometimes feel spartan and austere. Luckily, the Oriental Hotel Tokyo Bay is offering a room that’s not only unmistakably Japanese in appearance, but also incredibly cozy.

Called the Showa Retro 2.0 room, it takes its name from the Showa period of Japanese history. The era lasted from 1926 to 1989, but to most people the word “Showa” tends to be most evocative of the time between the late ‘50s and early ‘80s, as Japan transitioned away from the feudal and/or militaristic society it had been for centuries and the rapidly growing middle class enjoyed peace and prosperity.

The nostalgic design of the room includes old-school signage reminiscent of a Showa-era shopfront, and in the middle of the room, placed atop a section of tatami reed flooring mats and accompanied by some beanbag-style cushions, is a kotatsu. While these blanketed tables with a heater on their underside haven’t completely disappeared from Japanese homes, they’re less common than they were back in the Showa days, when less-advanced home heating systems meant the kotatsu was the most reliably toasty location in the house.

As a matter of fact, kotatsu coziness is so high-level that once you’ve got your legs tucked underneath the quilt, it’s notoriously difficult to force yourself to leave. Those extended kotatsu sessions also serve as a prime opportunity for communication with friends and family members, and so the warm feelings associated with kotatsu aren’t just from the heater, but from the fun, leisurely conversations that take place.

Since it’s foolish to think you’ll only be in the kotatsu for a few minutes, proper preparation of snacks and entertainment is paramount. To that end, the Showa Retro 2.0 includes an array of complimentary munchies and drinks. For beverages, you’ve got green tea and canned sodas, and on the food end you get mikan (mandarin oranges, which are particularly delicious in winter), an assortment of dagashi sweet and salty snacks (many of which first went on sale during the Showa period), and ice cream, since enjoying frozen desserts while keeping your body warm is a special kind of decadence.

Obviously, the ice cream needs to be kept in the room’s mini freezer until you’re ready to eat it, but the Oriental Hotel Tokyo Bay thoughtfully positions the freezer so that it’s within arm’s reach of the kotatsu and you won’t have to come completely out of it in order to grab your treat.

Speaking of which, among the room’s amenities is a “magic hand,” one of those claw-on-a-stick gadgets, to extend your grasp just in case there’s something you left further than arm’s reach away, such as your phone, the TV remote, or the card games and unspecified retro “video game” the room is furnished with.

Though the name of the hotel is the Oriental Hotel Tokyo Bay, it’s actually in the city of Urayasu, Chiba Prefecture. It’s still just 20 minutes by subway to downtown Tokyo, though, and very close to Tokyo Disneyland, making it a viable option for anyone planning to visit the theme park (though you might be surprised about what’s changed there).