When Does Disney World Take Down Christmas Decorations? – Inside The Magic

Walt Disney World is famous for its overnight Christmas decoration session the night after October 31. The Halloween decor in Magic Kingdom is whisked away at lightning speed, and Christmas is put up at an equally amazing pace. But when do the Christmas decorations in Orlando come down? The answer is consistent, but not necessarily as fast.

The famous overnight decoration session by Imagineers at Magic Kingdom is something to behold. Attending a Not-So-Scary Halloween party or a Boo Bash on Halloween and then returning the next morning to merry fanfare is something Disney fans should put on their bucket list. The video below shows the lightning speed at which the park is undressed and redecorated.

As the holidays pass, you’ll generally be able to enjoy all of Walt Disney World Resort’s Christmas and winter decor until after New Year’s Day. The first Monday after the new year is when decoration will slowly start to come down. First to go will be the Resort Hotel lobby Christmas tree centerpieces or exterior decoration touches around January 3 or 4. Then, the Disney Springs Christmas Tree Trail will be packed up.

Next, you’ll start to see holiday season wreaths and garlands removed from all Disney Parks, such as Magic Kingdom’s Main Street, U.S.A. or Animal Kingdom’s Discovery Island area. Disney’s Cinderella Castle Dream Lights will be turned off and removed, as well.

Largely, as the runDisney Walt Disney World Marathon weekend approaches, the decor will come down a bit faster. As that middle January weekend arrives, the Disney Christmas decor will be completely removed and packed up for the next year’s holidays events.

It should be mentioned that EPCOT’s International World Showcase Festival of the Holidays ends December 30, (or thereabouts, depending on the year) and the decor will be removed that night or the next day. New Year’s Eve and Day celebration attractions such as music stages, etc. will be put in place. 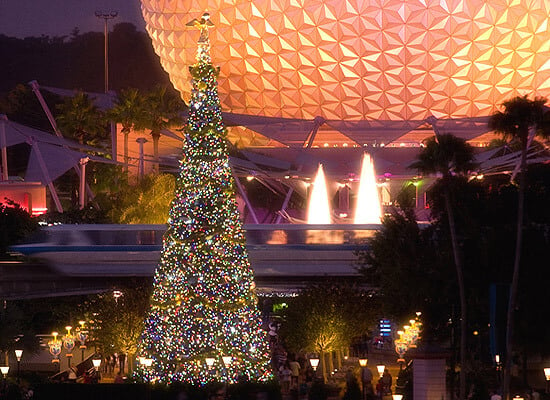 When you’re ready to plan your bucket list vacation to either see Disney transform Magic Kingdom from Halloween to Christmas or be there to see Disney take down Christmas decorations, consult the travel professionals at Academy Travel. They know just when you book you into your favorite Disney Resort Hotel to see the magic transformations. Contact them at 609-978-0740.

When do you see your favorite Disney Christmas decorations come down? Leave us a comment below!